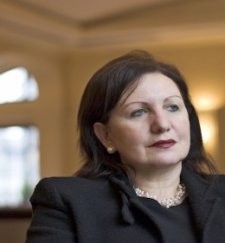 Seyla Benhabib
Senior Research Scholar in the Faculty of Law, School of Law

Seyla Benhabib is a senior research scholar and adjunct professor of law at Columbia Law School. She is also an affiliate faculty member in the Columbia University Department of Philosophy and a senior fellow at the Columbia Center for Contemporary Critical Thought. She was a scholar in residence at the Law School from 2018 to 2019 and was also the James S. Carpentier Visiting Professor of Law in spring 2019.

Benhabib is a distinguished international scholar who is known for her research and teaching on social and political thought, particularly 20th century German thought and Hannah Arendt. Over the past two decades, she has become recognized for her contributions to migration and citizenship studies as well as her work on gender and multiculturalism.

Benhabib was the Eugene Meyer Professor of Political Science and Philosophy at Yale University from 2001 to 2020. She previously taught at the New School for Social Research and Harvard University, where she was a professor of government from 1993 to 2000 and chair of Harvard’s Program on Social Studies from 1996 to 2000.

She was the president of the Eastern Division of the American Philosophical Association from 2006 to 2007 and has been a member of the American Academy of Arts and Sciences since 1995. A 2011 Guggenheim Fellowship recipient, she has been a research affiliate and senior scholar in many research institutions in the United States and in Europe, such as the Russell Sage Foundation (2000–2001), Berlin’s distinguished Wissenschaftskolleg (2009), NYU’s Straus Institute for the Advanced Study of Law and Justice (2012), the Transatlantic Academy in Washington D.C. (2013), and Center for the Humanities and Social Change at Humboldt University of Berlin (2018).

Benhabib has also delivered the Gauss Seminars in Criticism (Princeton, 1998), the Spinoza Lectures (Amsterdam, 200), The John Robert Seeley Lectures (Cambridge University, 2002), Tanner Lectures (University of California, Berkeley 2004), Catedra Ferrater Mora Lectures (Girona, Spain 2005), and the Dewey Lecture in Law and Philosophy at the University of Chicago Law School(Spring 2020). In fall 2020, she will deliver the annual human rights lecture at the London School of Economics.

Among her other professional activities, she organized the Istanbul Seminars in her native Istanbul, Turkey from 2009–2015 (with the Italian RESET Foundation, devoted to intercultural cooperation), which focused on enhancing international cooperation with intellectuals from Egypt, Tunisia, Iran, Israel, and Palestine, among other countries.

She established Constellations: An International Journal of Critical and Democratic Theory with New School for Social Research Professor Andrew Arato and served as the journal’s co-editor from 1991 to 1997. She also served on the editorial board of Citizenship Studies, Political Theory, Journal of International Political Theory, Human Rights Review, Global Constitutionalism, Blatter fur deutsche und internationale Politik, and Jus Cogens.